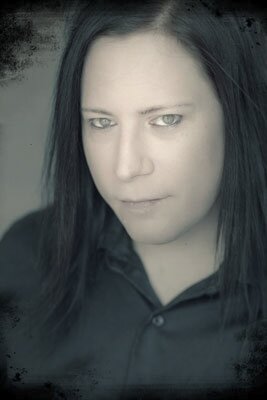 Out on a late-night walk with camera in-hand in Hollywood.  The moon was intensely bright tonight.  Downtown Los Angeles isn’t the same these days.  It is quiet tonight and it has never been so empty.  It’s surreal passing the Vista Theatre, the Shakespeare Bridge, Hollywood Boulevard, the Roxy Theatre, the Sunset Strip, and Capitol Records and not seeing a single human being.    With camera in-hand it’s time to capture Hollywood’s deserted streets.  I wrote this quick story above based on the fantastic images on Instagram by my guest today Gene Blalock.  Blalock is a Los Angeles-based Director,  known as much for his touching, heart-warming films as his eccentric horror vignettes. Today we sit down and get to know my friend Gene and learn about his production company, Seraph Films.

1. Did you have certain film genres that inspired you growing up? Can you give us a few examples, and why?

One of my earliest recollections is “Star Wars” – a film which absorbed most of my prepubescent life. Around that same time, my friend Patrick and I would spend Sunday afternoons watching the old Universal Monsters and campy B-films, which probably fed my fascination for the more macabre cinema.

I think the first film that really affected me on a purely emotional level was “E.T. The Extra-Terrestrial.” To this day, Spielberg remains one of my favorite filmmakers. He has a unique way of finding a kind of emotional symbiosis in even the most fantastical stories, creating empathy between the viewer and the characters. The ability to do that is something I really love about cinema.

As I got older, I discovered the films of David Lynch, which impacted me on a completely different level. I appreciate that his films leave me contemplating long after I’ve watched them. His way of storytelling is on a whole different level and comprehensively left of center from any other filmmaker.

Of course, there are loads of other films and filmmakers that have left a mark over the years, but those are my earliest memories.

2. Who would you say are some of your directorial influences?

Lucas, Speilberg, and Lynch certainly have been influential. Tim Burton is definitely a big influence, though I don’t think anyone can ever come close to his aptitude for marrying whimsical with morbid. In the horror genre, I’ve always had an affinity towards Wes Craven. The original “A Nightmare On Elm Street” tormented my young imagination for many sleepless nights. I’m sure this list could go on and on.

3. To those who are learning to be directors, what sort of advice would you give about bringing human perspective to your work?

For me, it’s all about the connection with the characters. If I don’t feel something for the inhabitants of a story, be it love, disdain, fear, then I can’t care about them or what happens to them. Need to find the empathy that makes my audience want to continue the adventure – to learn what happens with the character. Have absolutely failed at this many times, but it’s what I strive to accomplish. I think I am still learning and growing as a storyteller, so I’m not sure my advice matters much.

4. SEVEN DAYS IN MEXICO (Seraph Films) is a film that follows acclaimed musician and Human Drama front-man, Johnny Indovina, on a journey of rediscovery. Gene, does filming this style of movie differ from horror movies, or is it quite similar? (http://www.sevendaysinmexico.com/)

In some ways, it is the same, and in others, it’s worlds apart. In terms of storytelling, it’s what I just talked about. It’s the connection you have with the protagonist of the film. Do you care about their plight… do you want to go on this journey with them? In terms of filming a documentary, it’s fundamentally different than shooting a narrative story.

With documentary work, you have to be prepared to just start filming on a moment’s notice. You often do not have the luxury of planning shots and making sure the lighting is correct. You don’t get a second take. It’s a completely different approach to filmmaking. There is a certain beauty in forever freezing that particular moment in time, just as it happened – a magnificent truth if you can capture it.

5. Gene Blalock I was reading that one of your current projects at Seraph Films is “Carpe Noctem.” What can you tell us about this film? (http://www.carpenoctem.film/)

At its core, “Carpe Noctem” is a love story: girl meets boy, they fall in love… I think it’s a story most of us can relate to. This love story just happens to take place over the course of one night in the seedy nightlife of the Los Angeles underground scene. It’s a whirlwind adventure with a real cast of uncommon characters. Again, I spent a lot of time trying to make sure that the way the characters presented themselves were interesting and invoked a sense of empathy. That’s tougher when the characters are a bit out there, but I think we managed to find the commonality necessary for it, and I think our audience will really enjoy the ride.

Other stories at What On What’s Good

RADIOACTIVE on Prime Video on July 24

Send us an email at whatonwhatsgood@gmail.com or fill out the form below.

What On What's Good is spreading positivity in the sports, entertainment and other industries #whatonwhatsgood creates reviews, interviews (#cinqque5tion), suggestions & discussions to engage individuals in order to have a fun experience together.

A conversation with musical artist Omgimjoe